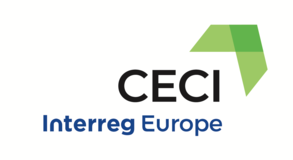 University of Zaragoza course about objectives and goals of the SDGs” (March 17, 2021)

The General Directorate of Climate Change and Environmental Education presents de CECI Interreg project in a course on Sustainable Development Goals, organized by the University of Zaragoza, on the Teruel Campus The Government of Aragon is one of the eight partners in the interregional cooperation project Interreg Europe CECI, focussing on the key role of citizens in the circular economy. The General Directorate of Climate Change and Environmental Education carried out, last March 17th, an external dissemination event of CECI project, participating in the course on the Sustainable Development Goals (SDG) organized by the University of Zaragoza - Teruel Campus. At this event, the General Director Marta de Santos presented the challenges and opportunities of the circular economy and its link in the Waste Management Plan of Aragon (GIRA Plan). CECI's development status was introduced by the Environmental Planning Service, after which two CECI stakeholders of Aragon presented their good practices related to the project.

Presentation of the project in the General Directorate of Climate Change and Environmental Education (July 30, 2020)

At the meeting, the staff of the Environmental Planning Service and the Contaminated Soil Service learned in detail about the objectives, actions and materials of the CECI project.